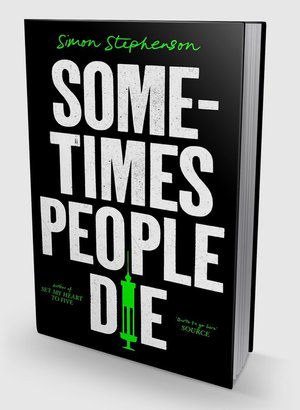 Lara Prescott, the author of The Secrets We Kept described Sometimes People Die by Simon Stephenson as ‘simply unputdownable’ Let me tell you Ms Prescott does not lie.

I feel strange admitting that, I never thought of myself as someone who would enjoy a medical drama. I have never enjoyed those TV soap operas set in hospitals, GP surgeries or vets for that matter. It is true that Sometimes People Die is set in a hospital, but it is also a compelling mystery that sucked me in and spat me out again after just two nights of reading.

There is something about the way in which Stephenson writes that is very personal. There are elements of a diary, a memoir, but ultimately it feels like this book has been written for me. I am consuming each page as if I am in conversation with the main character in the same way I might be in conversation with a friend. I haven’t seen them for a few years and over dinner we recount what has happened to us over those years. My own mundane story pales into insignificance in comparison to the adventures they have had at work.

Despite being the person with the less exciting career at no time do I feel like I am with a perfect cousin. Instead, I am enjoying hearing about how my friend has overcome their setbacks, created a new life, achieved new successes, despite the obstacles that they made for themselves, and others imposed on them. I am happy to conclude that like the main characters in every other good book I have ever enjoyed reading Stephenson has created a character who although far from perfect, is someone that I care about.

I would have been sorely disappointed if the conclusion of the story had had to be told by someone else.

There is something else that is one of my measures of a good book. They are often just not quite good enough. The conclusion of Sometimes People Die is as compelling a read as the rest of the story. It shows the complex nature of what some people will do to manipulate others and the risks they will take to achieve their goals. But I would have preferred a different style of ending. Or maybe it is that as I consume each page, I am building an expectation of how Stephenson will conclude the story. He throws me a curve ball and takes the plot in one unexpected direction followed by another. I stop counting and by the time coffee has been served at the end of dinner I am just enjoying my friend’s recollections.

Add A Thriller To Your Journey

Is Your Potential Boss Prejudiced Against You?

Does Your Name Damage Your Job-Hunting?