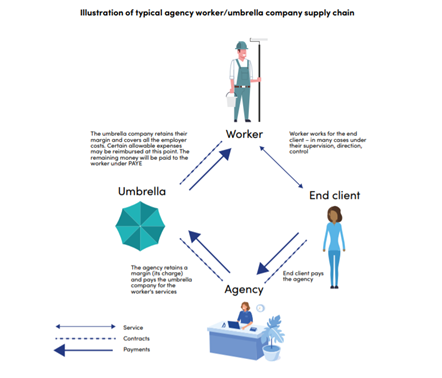 Umbrella companies should be banned says the TUC so accountability in supply chains can be improved and recruitment agencies can be forced to take responsibility for the welfare of their agency workers.

An umbrella company is essentially a payroll company. They are used by recruitment agencies to operate a PAYE (pay-as-you-earn) system for the agency workers that they find work for.

Is that a problem?

The short answer to that question is yes.

When someone works under an umbrella company arrangement, they can experience a multitude of problems.

These can be simply not knowing what their real terms and conditions of employment are. Or at the other end of the spectrum it can mean people being, unknowingly, becoming embroiled in fraudulent tax arrangements, with serious financial consequences.

Unions firmly believe that umbrella companies do not carry out a necessary function in the labour market. Recruitment agencies and end clients should be responsible for paying and employing their umbrella workers.

Who are you working for?

The agency worker may not know who their actual employer is.

Freelancers/contractors also use umbrella companies to manage their pay and tax responsibilities.

If the freelancer uses a recruitment agency to find work, the agency may insist they use a particular umbrella company.

If they find their work directly from end clients, the end client can often insist that the contractor uses an umbrella company.

The diagram below is an example of how a worker might come to use an umbrella company:

If Worker A has a problem with their pay, their holiday leave, or with their tax contributions, they have to speak to the Umbrella Company D, not the organisation that they do work for, Company C, or their recruitment agency, Agency B.

Umbrella companies do not carry out a traditional, outsourced payroll function.

The TUC describes these payments as kickbacks and says that they range from £5 -£15, on average.  But they can be considerably higher.

This raises a vital question. If an umbrella company is not paid by the recruitment agency for the payroll services it provides, then who does pay for this service?

The answer is simple. The worker pays for it.

What problems do umbrella workers face?

Unions have reported that the following problems frequently arise:

Workers face misleading and unfair deductions from pay.  An agency worker using an umbrella company will often not receive the pay rate advertised by the agency.  Umbrella companies deduct their operating costs from an agency worker’s pay.  Payslips are often indecipherable.

Breaches of holiday leave and pay entitlement are widespread, with umbrella companies preventing workers from taking their holiday.

Large proportions of agency workers working under umbrellas do not receive the Key Information Document they have been entitled to since April 2020.

The use of umbrella companies fragments the employment relationship. Workers are not sure who to speak to resolve problems and can be passed from pillar to post when trying to sort out their issues.

It’s been widely reported that workers can become unwittingly embroiled in tax evasion schemes, operated by the umbrella company.  This can and has had tragic consequences for some workers.

There is no proper regulation of the sector.

This is despite the government accepting a recommendation from the Taylor Review into Modern Working Practices, that enforcement of umbrella companies should be stepped up.

The problem was summed up in the recent report from the Loan Charge All-Party Parliamentary Group which said,

“A fundamental conclusion of the ‘How Contracting Should Work’ inquiry is that the unregulated umbrella market is out-of-control, all too often exploiting contractors (even without them realising it) and is also a key reason for tax avoidance schemes operating and being so readily and openly advertised.”

The TUC believes that umbrella companies should be banned.  This would improve accountability in supply chains and force recruitment agencies to take responsibility for the welfare of their agency workers.

Can Your Boss Afford to Pay You?

Why Agencies and Employers Should Be Banned From Using Umbrella Companies

Capitalize on the Summer of Sport

What Are The Dangers Of Too Much Screen Time?